Will and Kirsty’s Summer Day

The sun was shining down on Hornington on the morning of Kirsty and Will’s wedding day, and the beautiful golden sunflowers and pink roses in Kirsty’s bouquet, a loving reminder of both Kirsty and Will’s Grandmas who sadly passed away, were gleaming in the sunshine. Kirsty and her Bridesmaids turned the Ballroom into their salon with Hair and Makeup artists, while Will and his Groomsmen played a few games of snooker to calm the nerves. 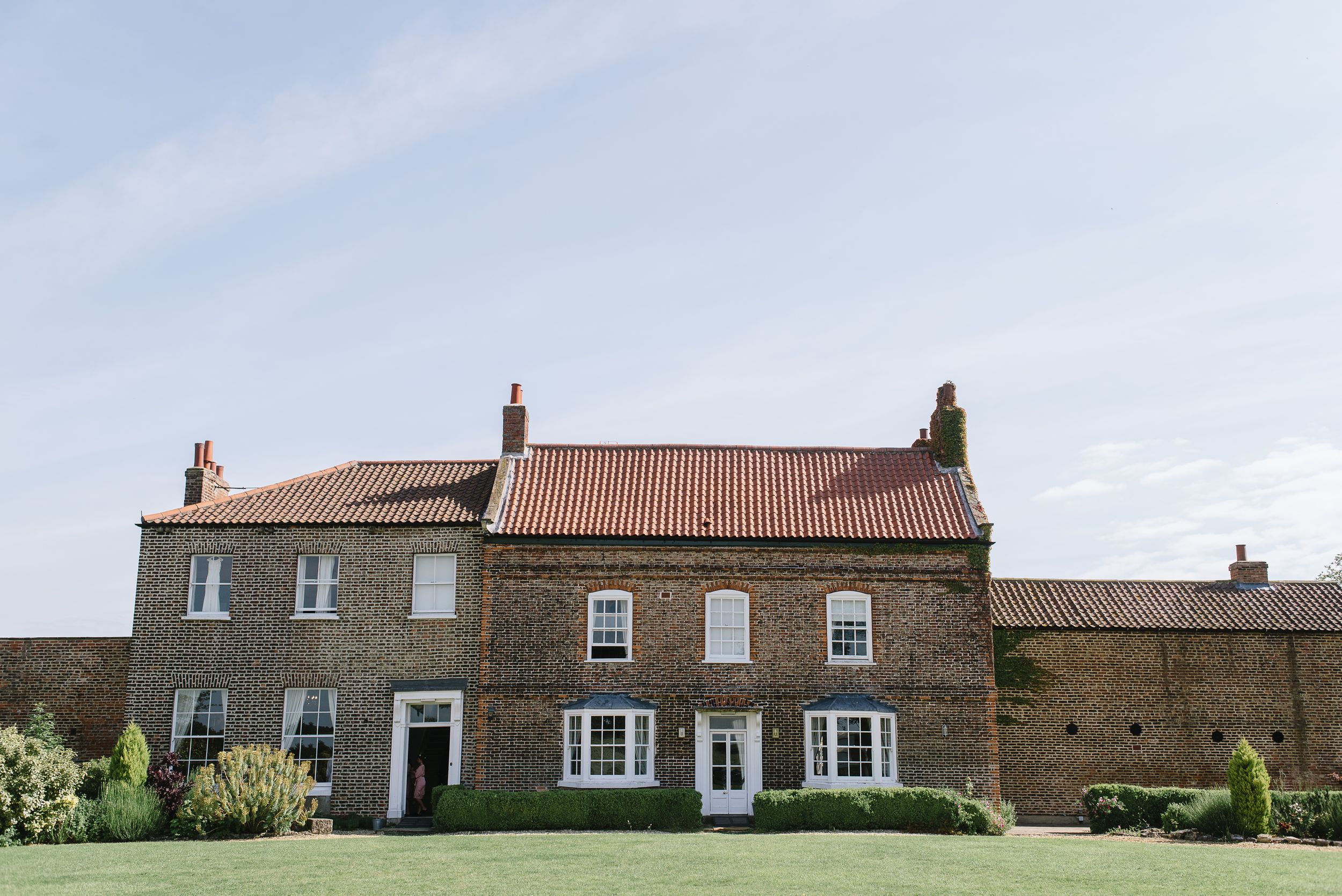 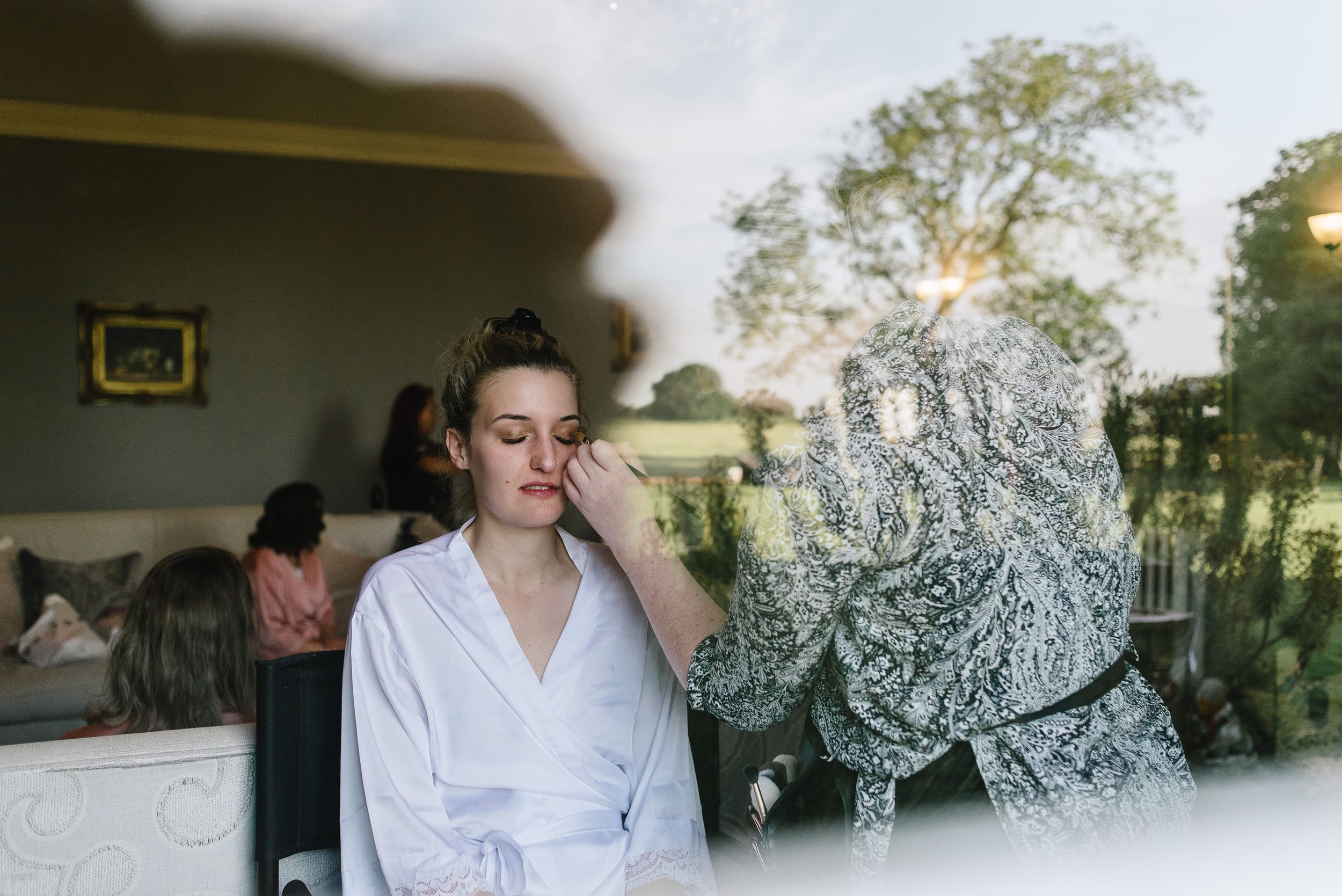 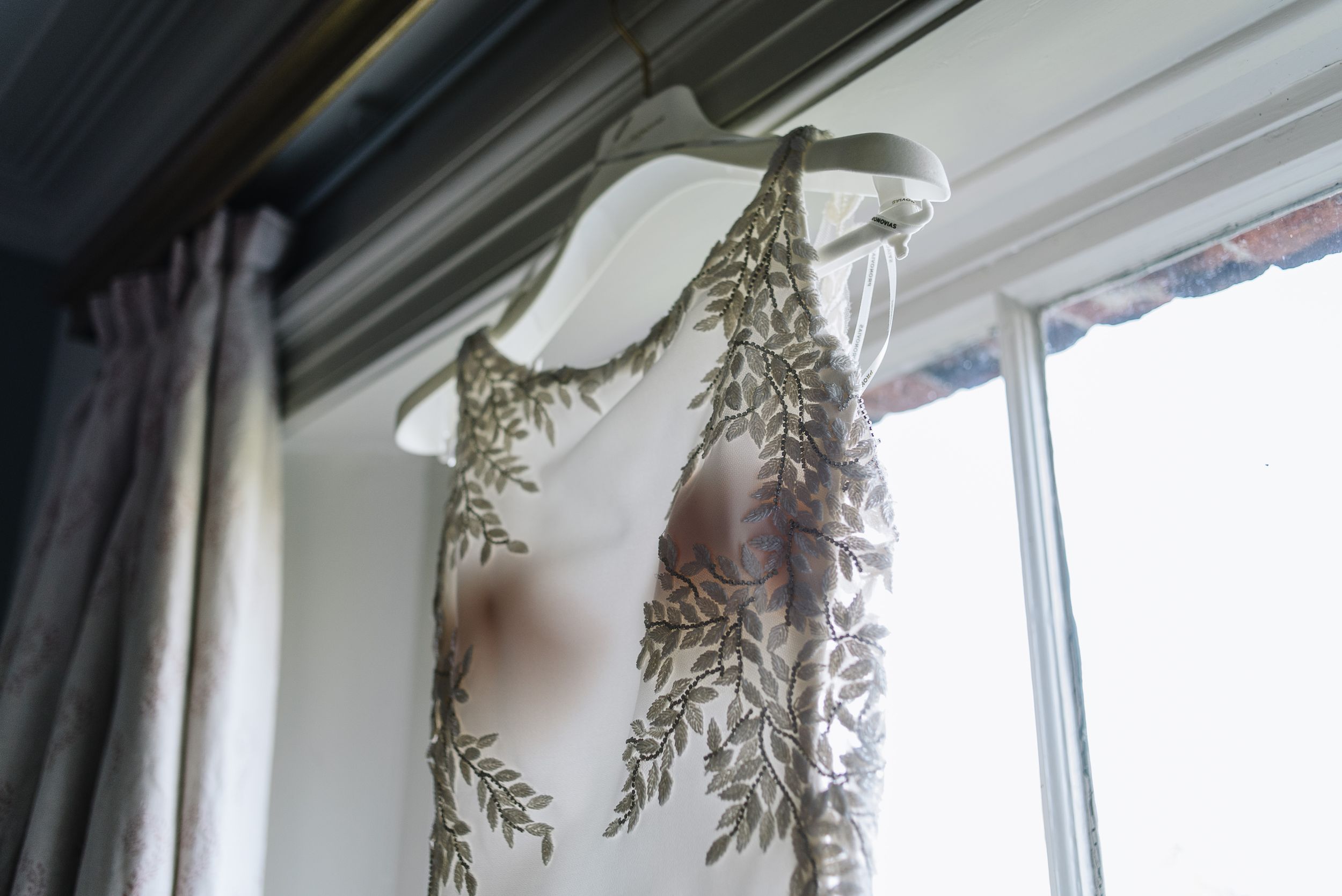 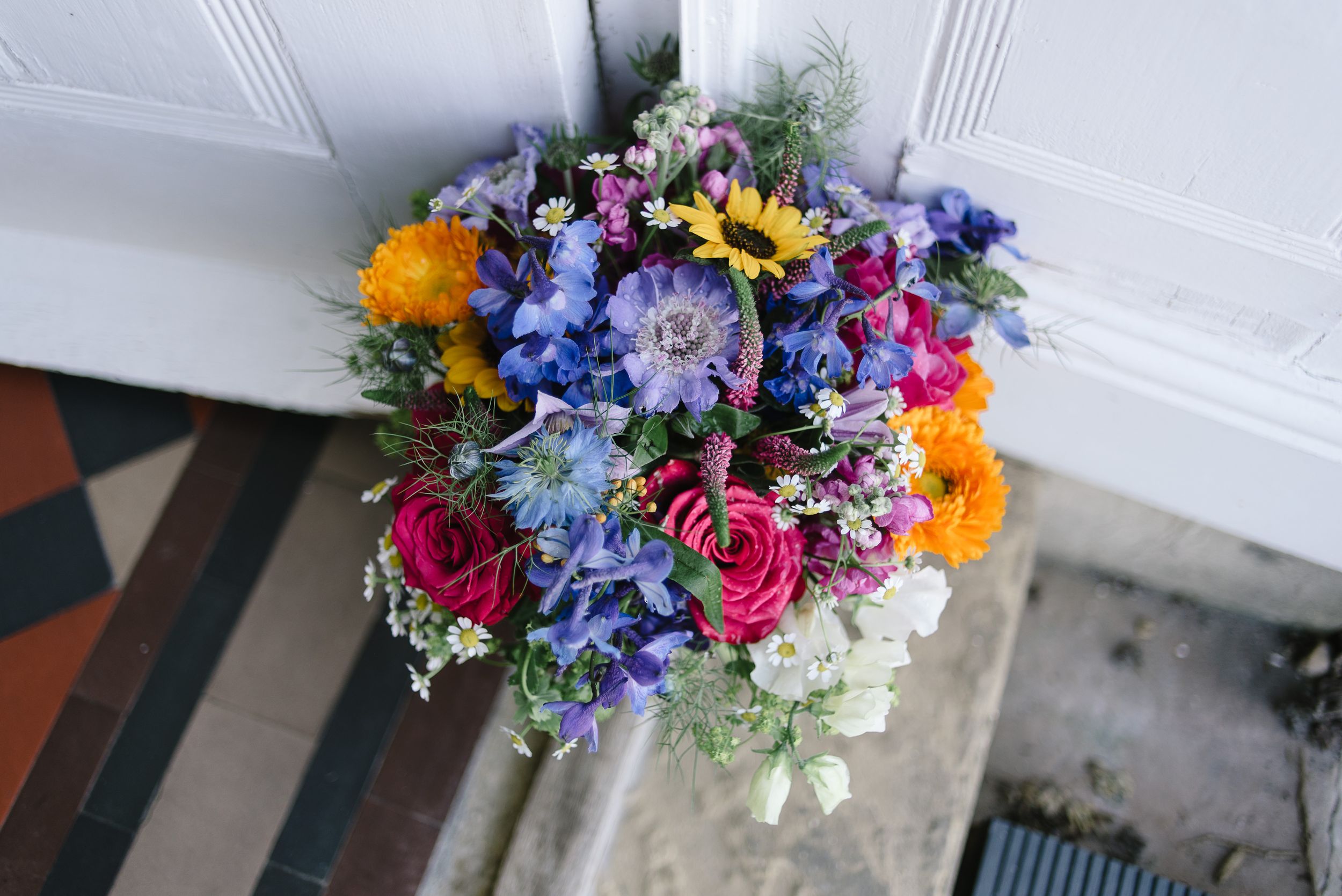 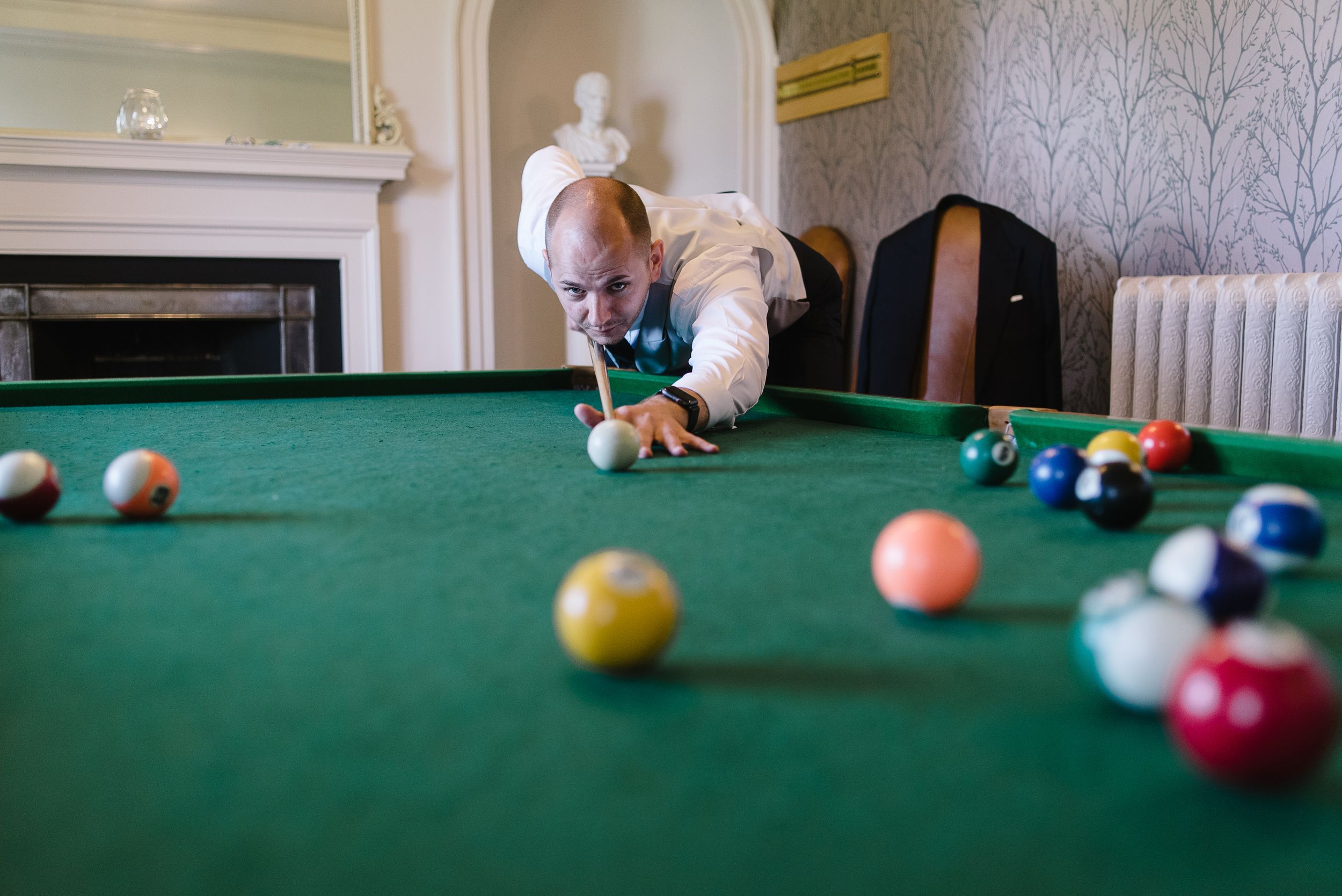 Our Bride and Groom’s nearest and dearest took their seats While the amazing James Hey entertained on his baby Grand Piano in the courtyard. Kirsty looked incredible as she walked down the aisle to meet Will and the newly weds were beaming from ear to ear throughout the whole ceremony. 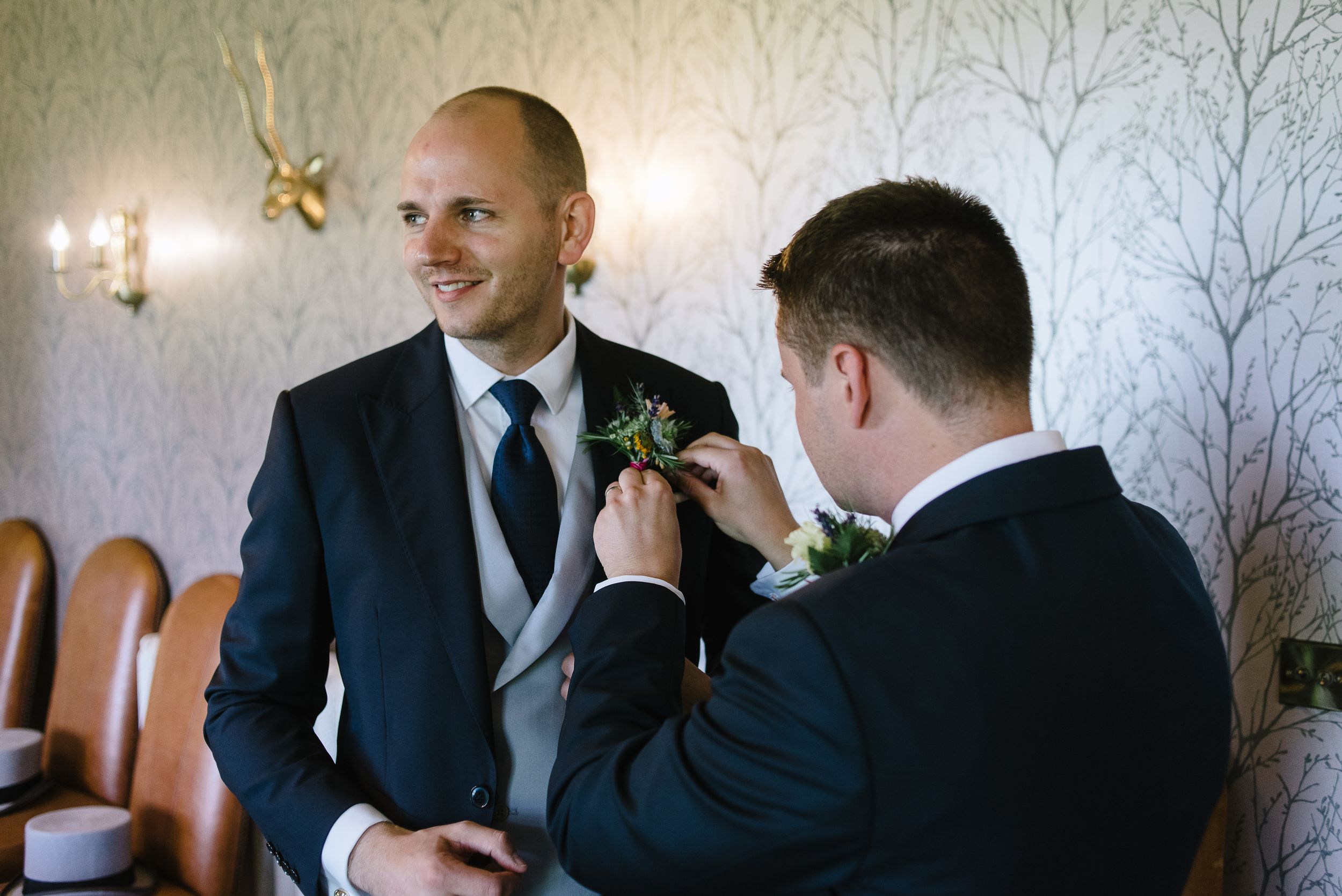 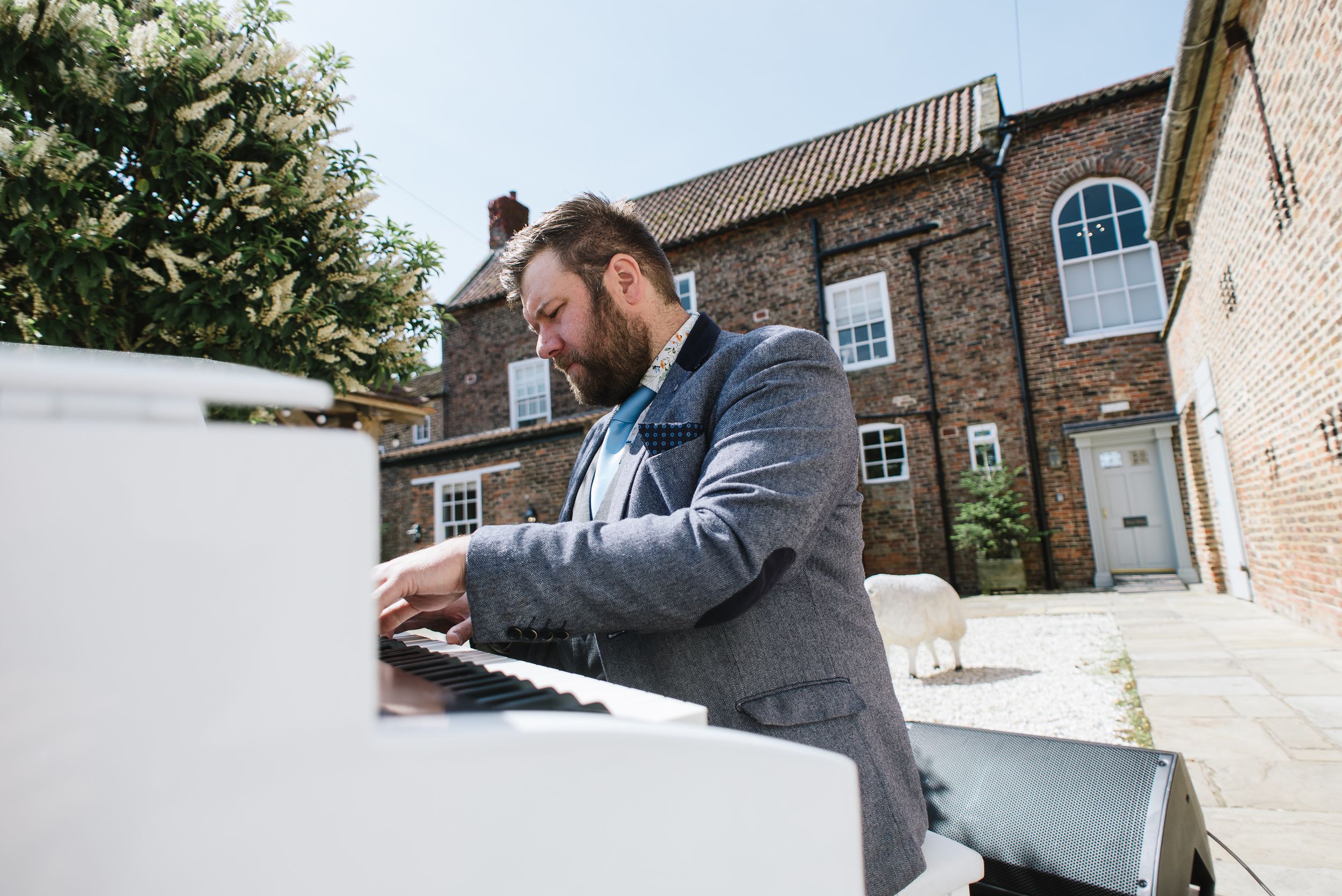 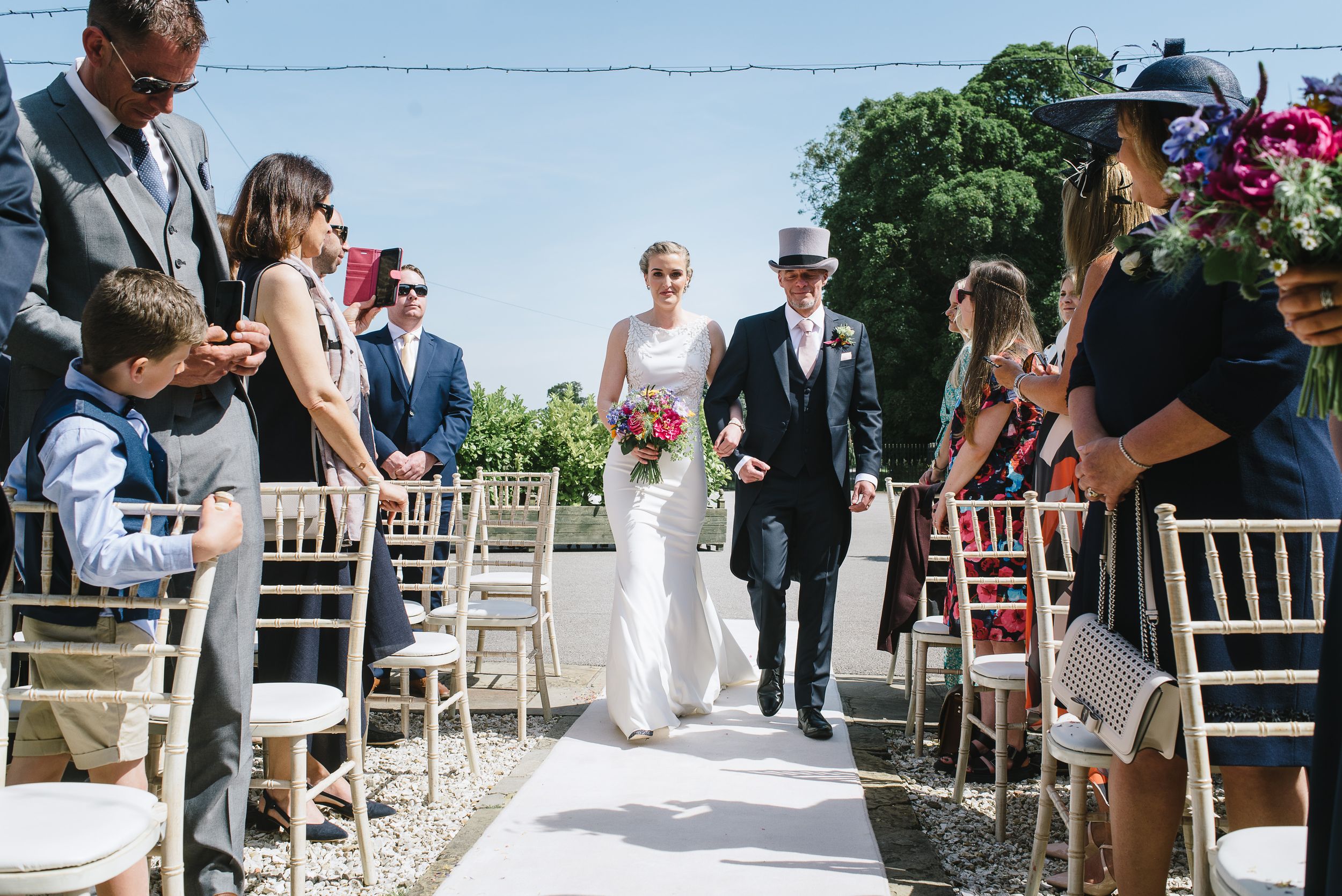 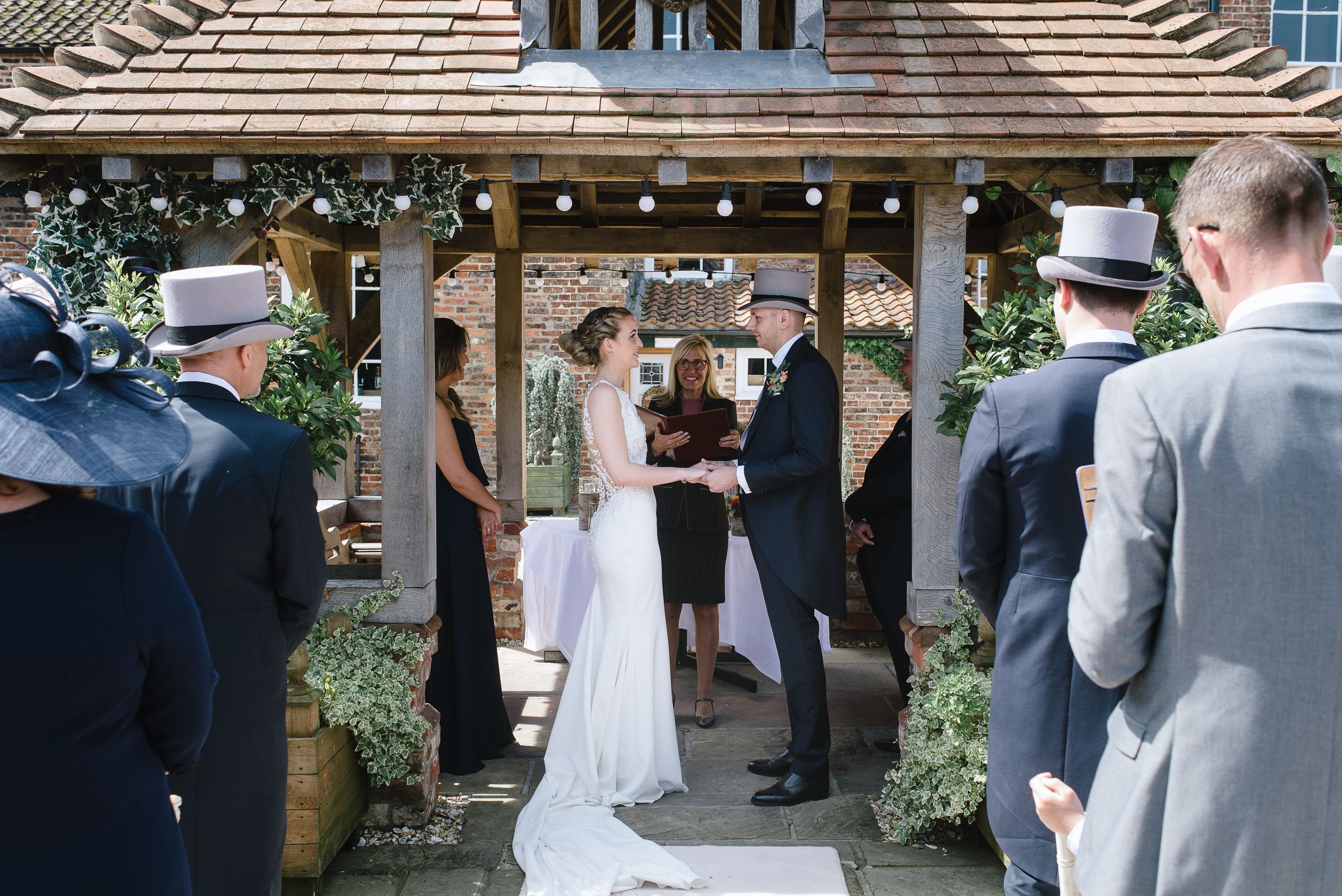 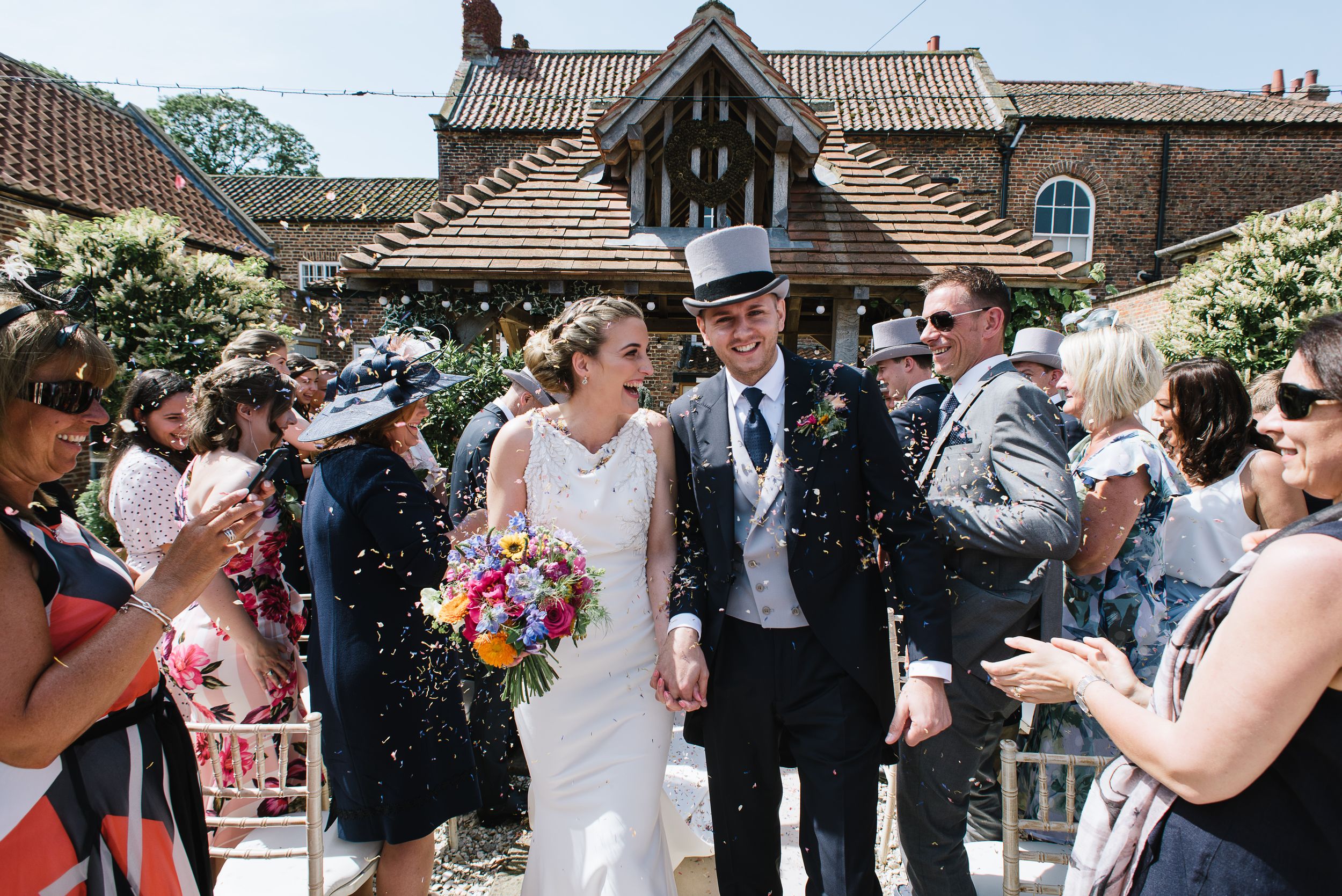 Everyone made their way to the front lawn which was bathed in sunshine. Guests were entertained by magician Luke Howells and it wasn’t long before the space hoppers came out too! Kirsty even took a ride in our little red trolly- we’ll it’s only fair she gets to out her feet up after all the wedding planning! 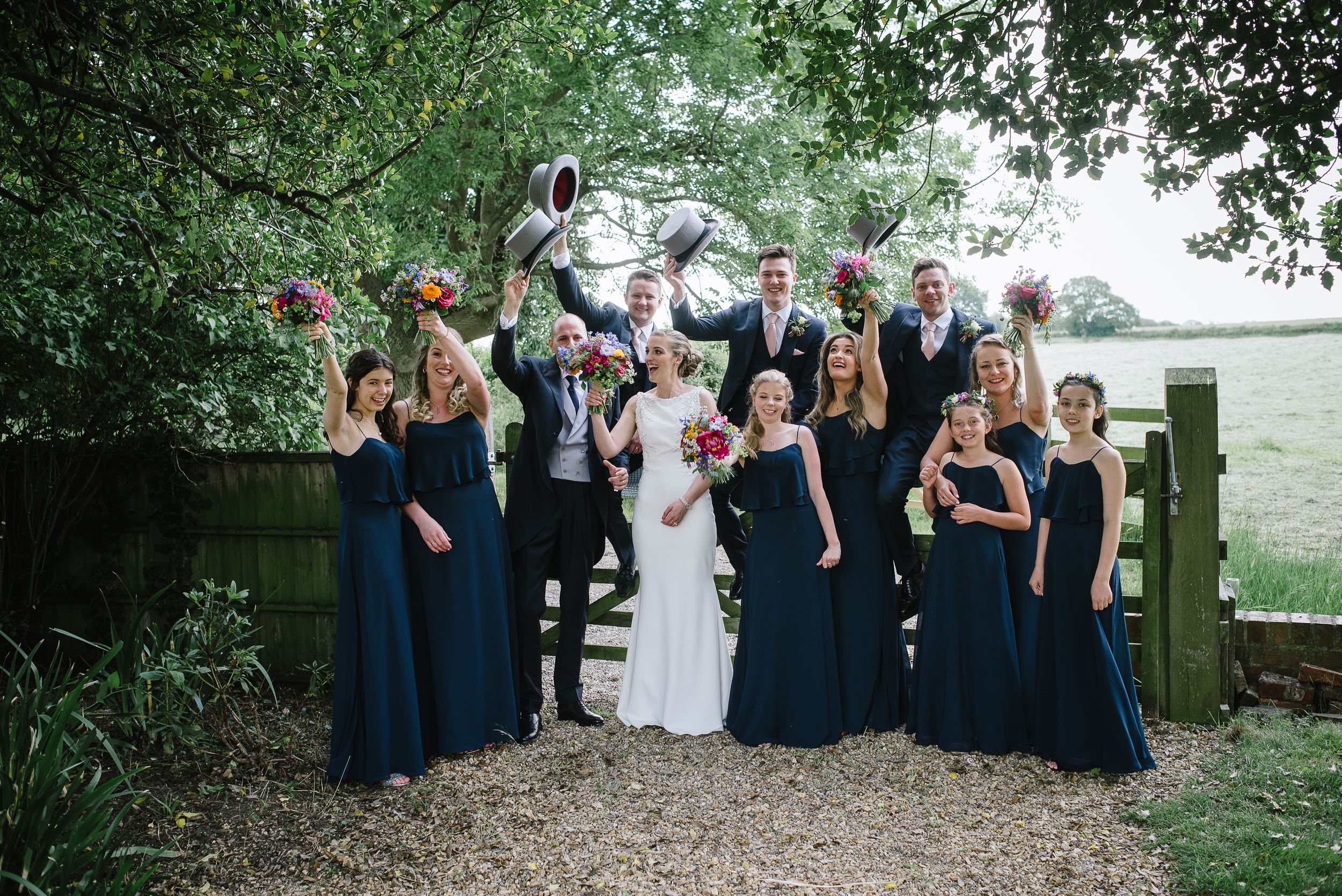 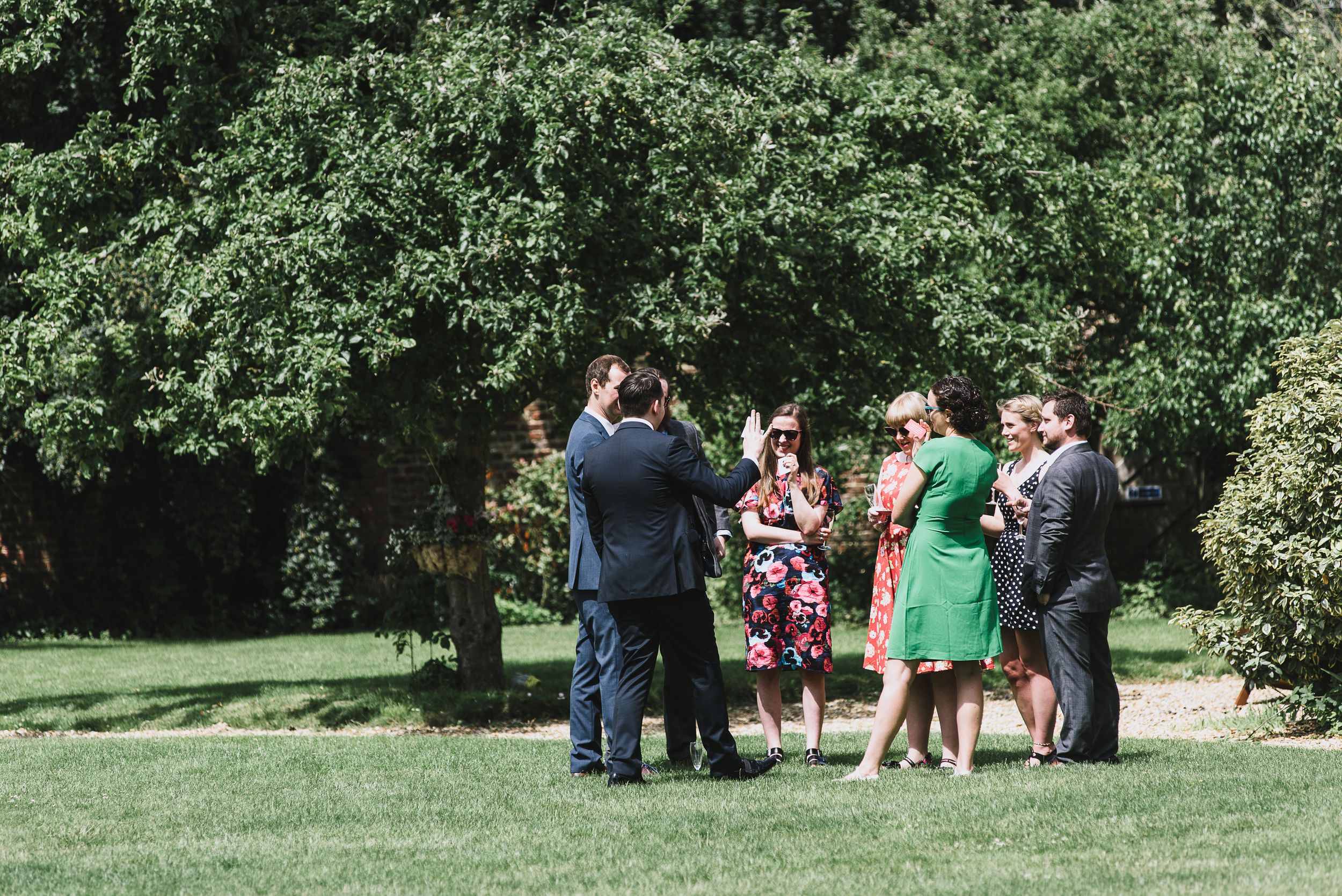 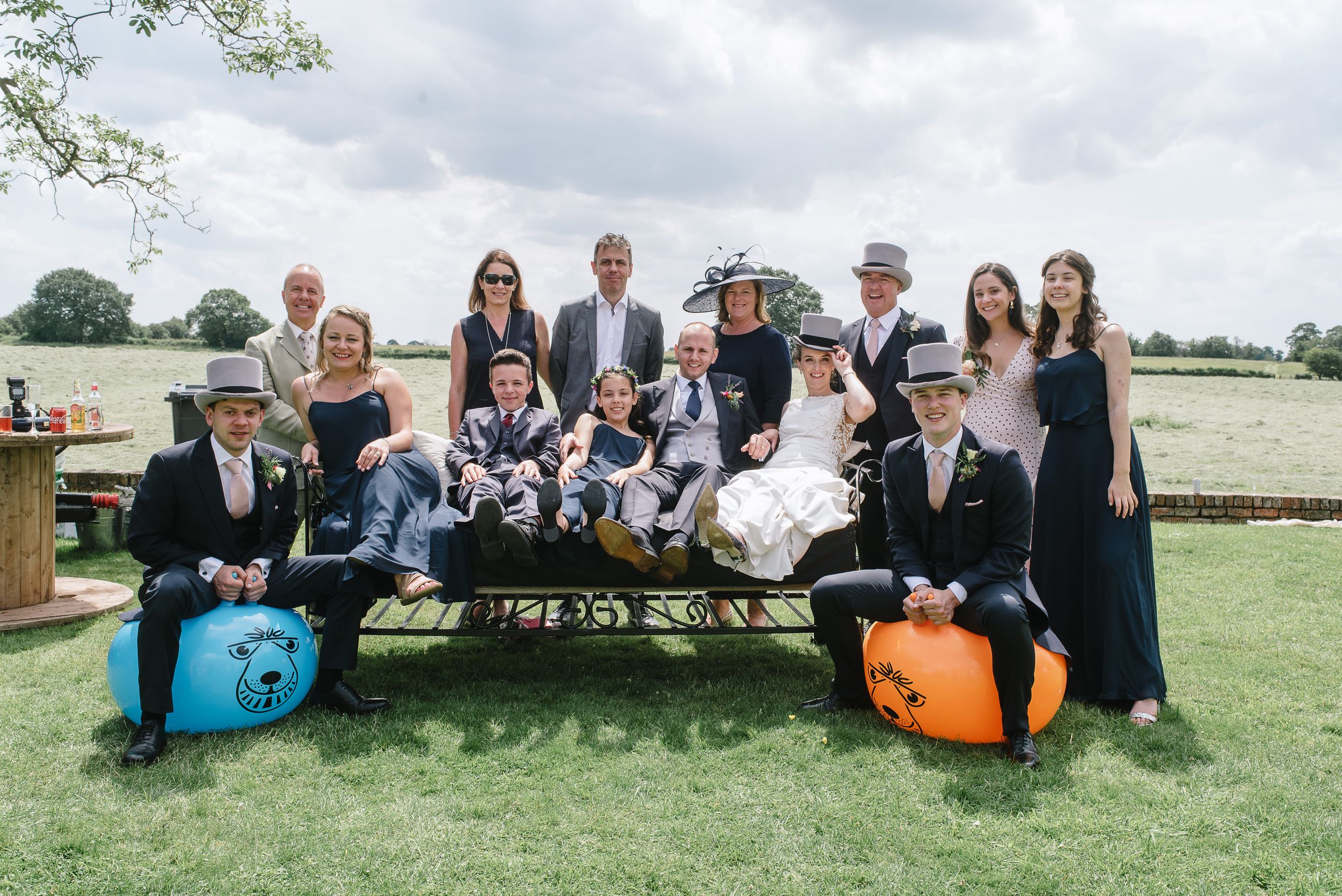 The barn was revealed as guests took their seats ready for the speeches. Each table was decorated with wooden crates, bursting with gorgeous colorful blooms matching Kirsty’s bouquet, surrounded with rustic wooden candle holders and confetti. Guests were greeted by a huge wooden periodic table seating plan which was absolutely genius and a nod to Kirsty’s career as a Chemist. At each place setting were 4 wooden hearts which guests could choose to place in 4 different charity boxes, dedicated to helping those suffering with cancer, heart and lung problems and Alzheimer’s- charities close to our Bride and Groom’s hearts. 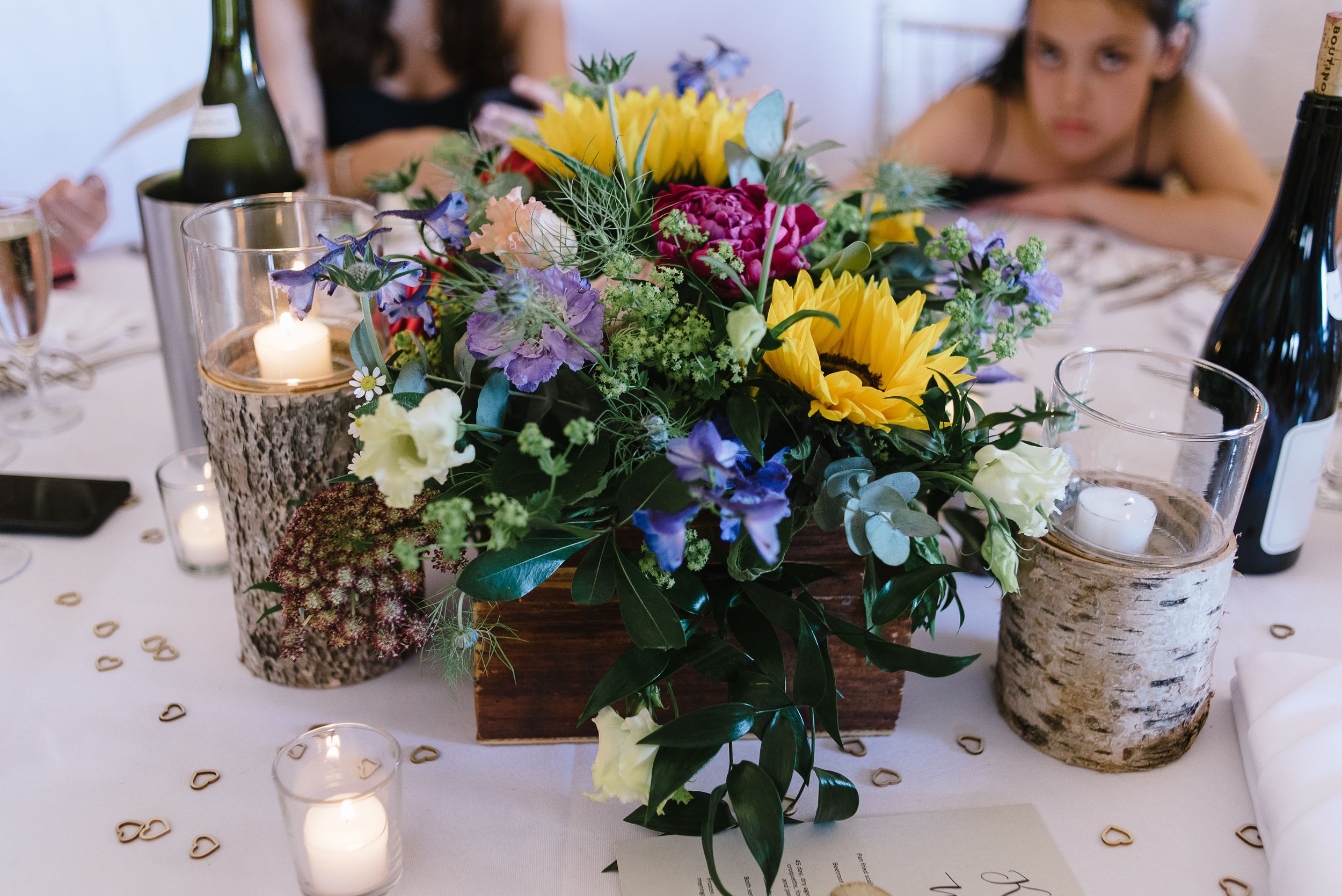 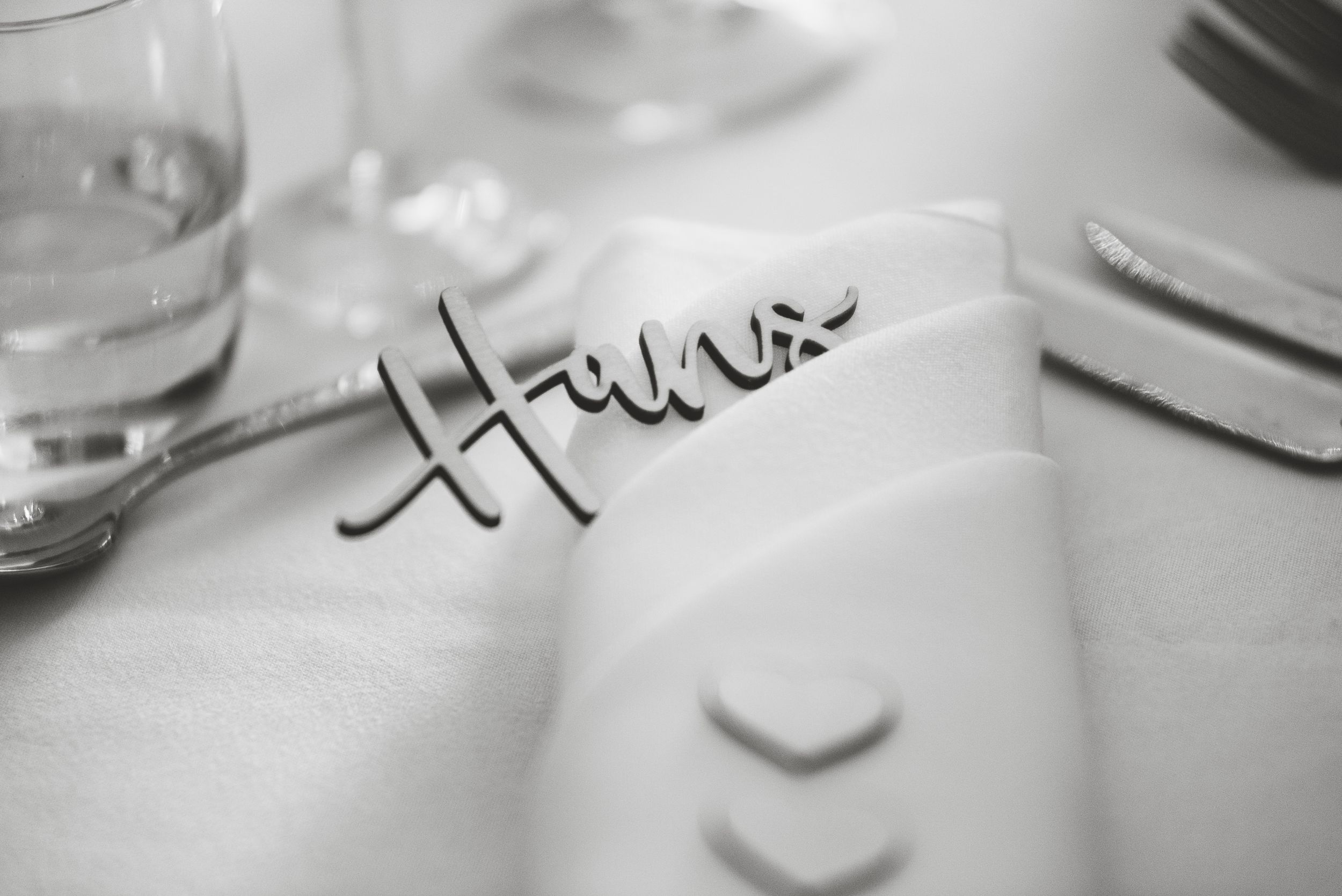 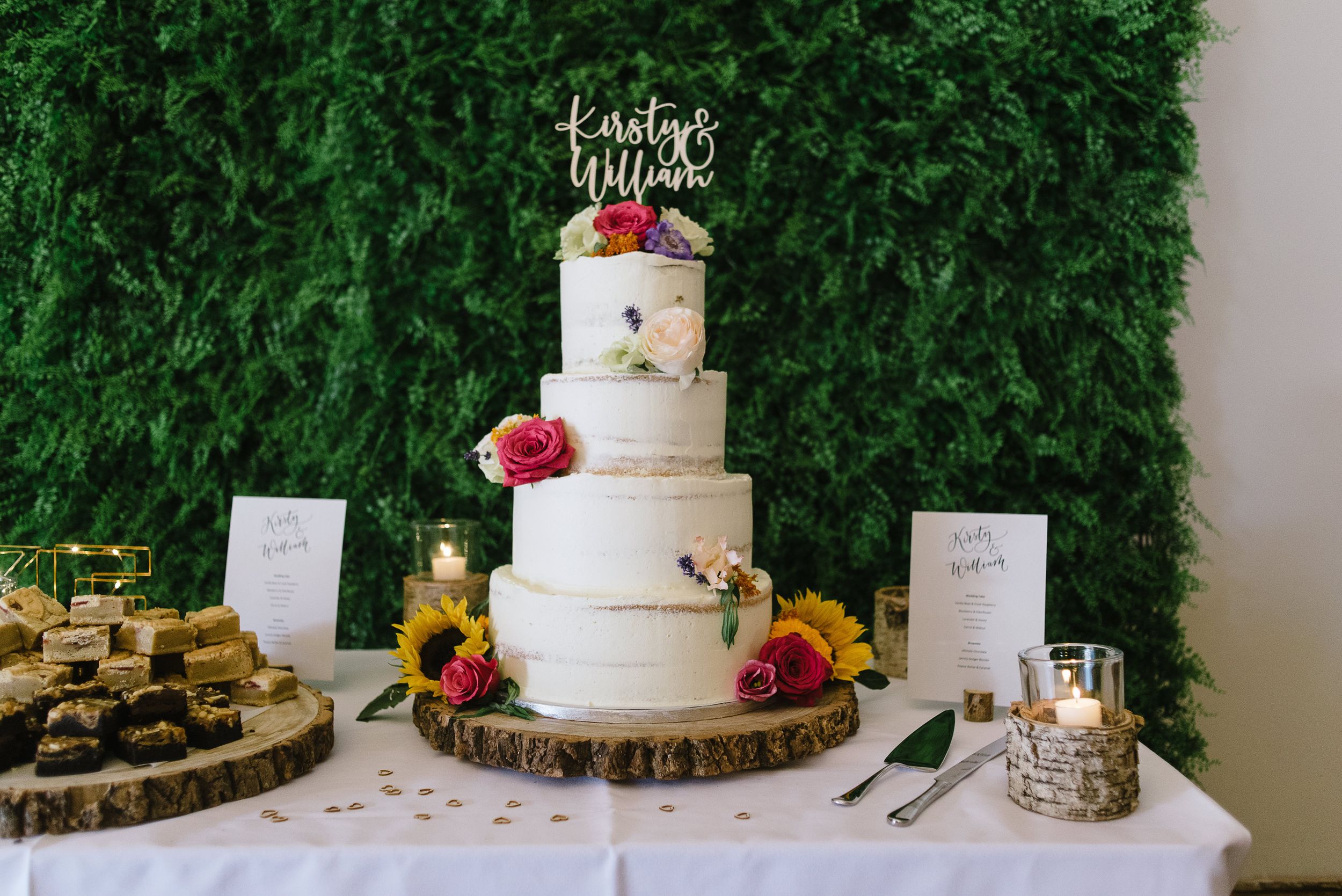 During Kirsty’s dad’s speech, he gushed about how proud he is of his daughter and how beautiful she looks on this special day. He distinctly remembers from Kirsty’s childhood that if mum ever said no, Dad always said yes. He presented Kirsty with a surprise selection of her favourite childhood books, and Will with an old cassette player for his car, which went down incredibly well with Will and all the guests! Natalie, Kirsty’s sister and Maid of Honour had planned the Hen Do which sounded amazing- Hover crafting, nude painting, a murder mystery party and topped off with a gin and cocktail masterclass! Will’s ambition, determination to achieve was praised, even if it might have turned him into a little bit of a Groom-zilla! Each table had a surprise envelop filled with photos of Will and his dad decided it was his job to embarrass him, as he has tried to do his whole life! 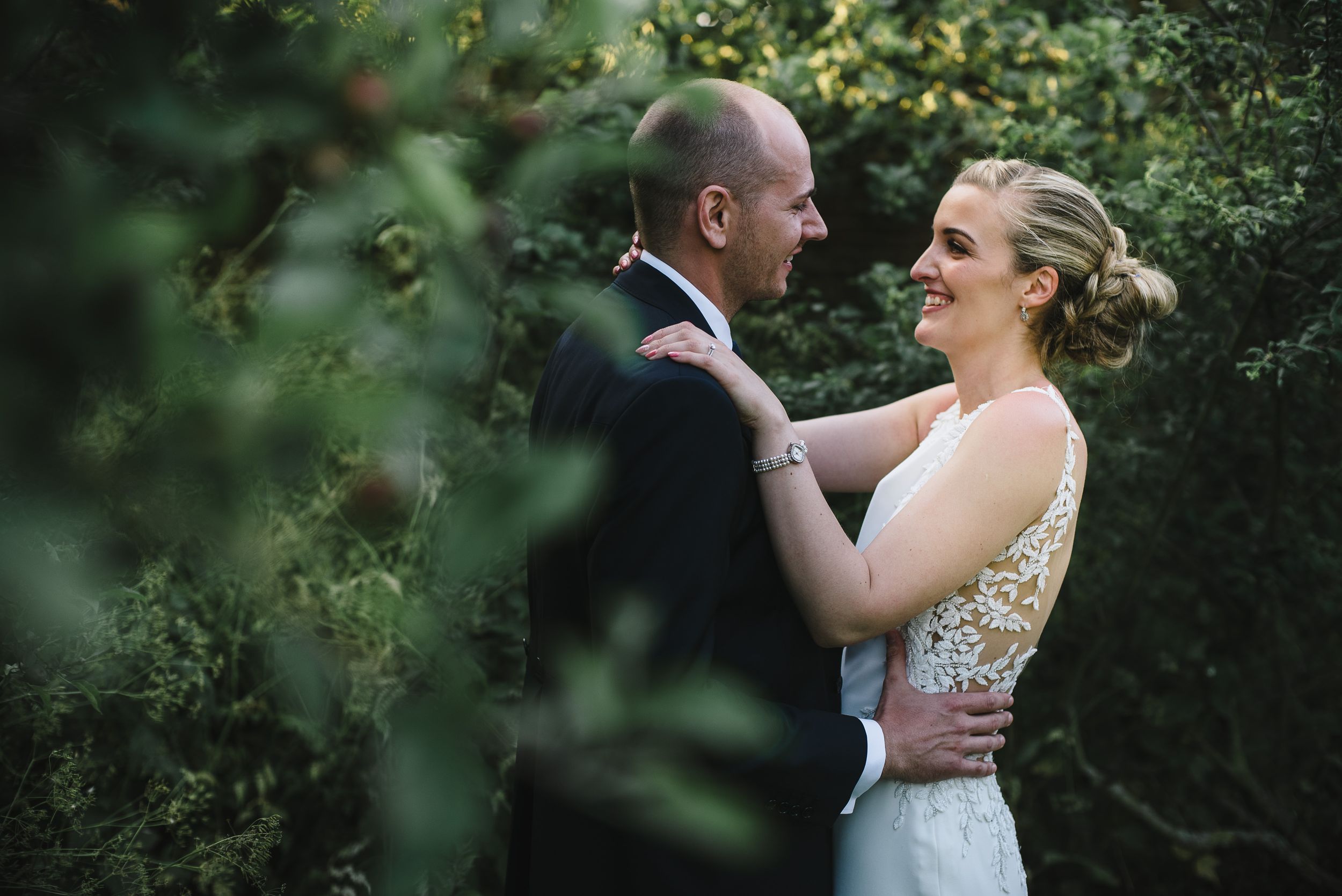 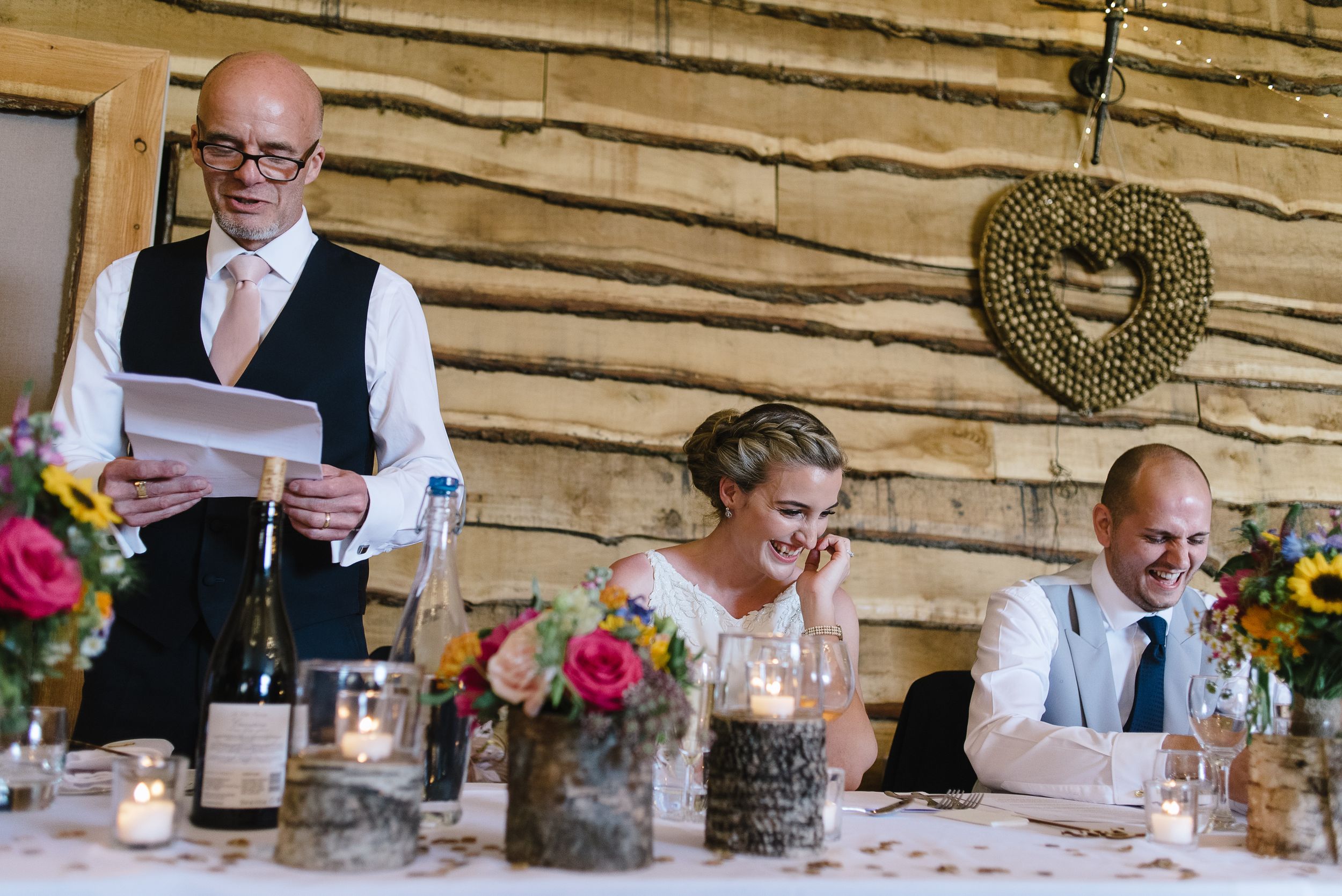 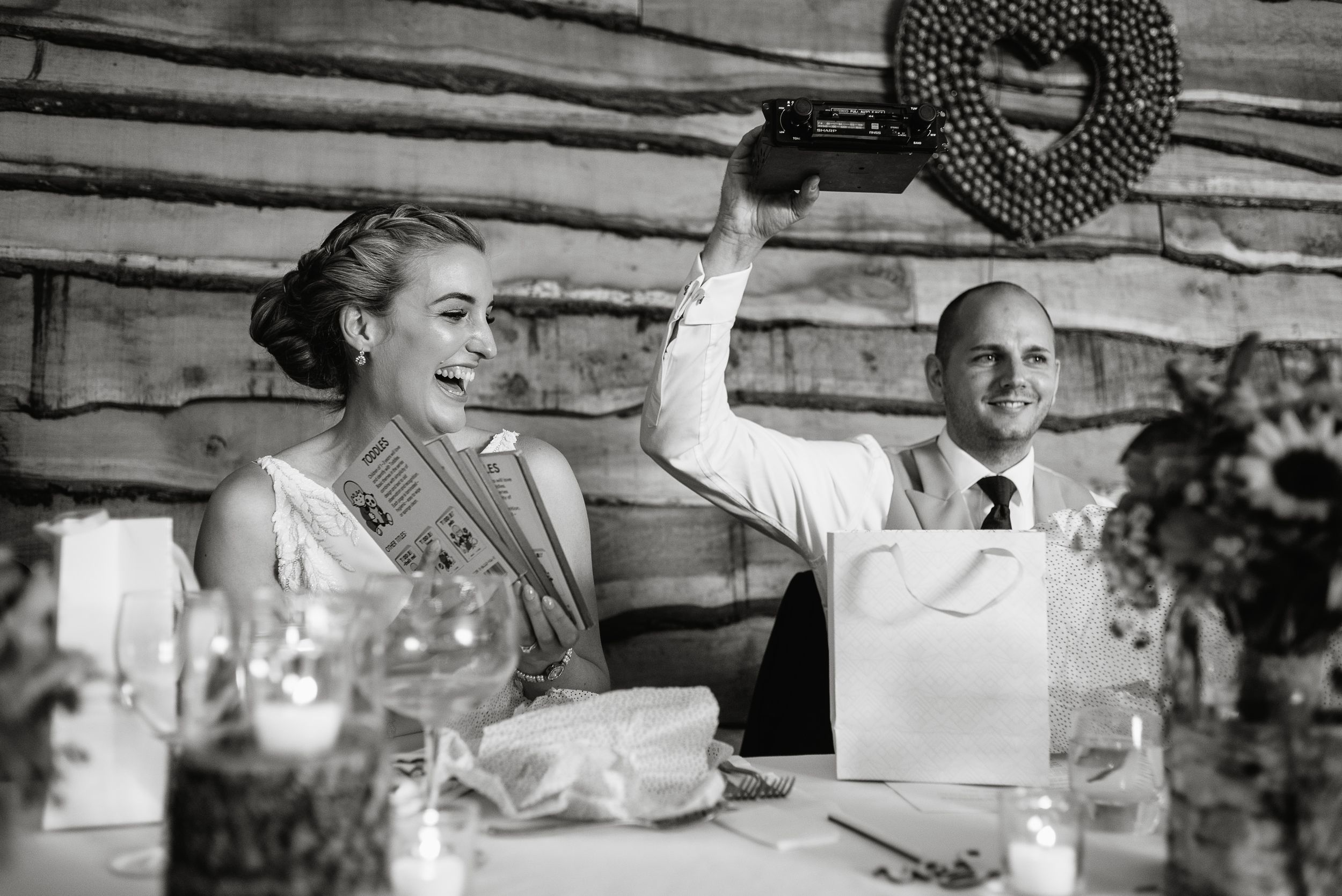 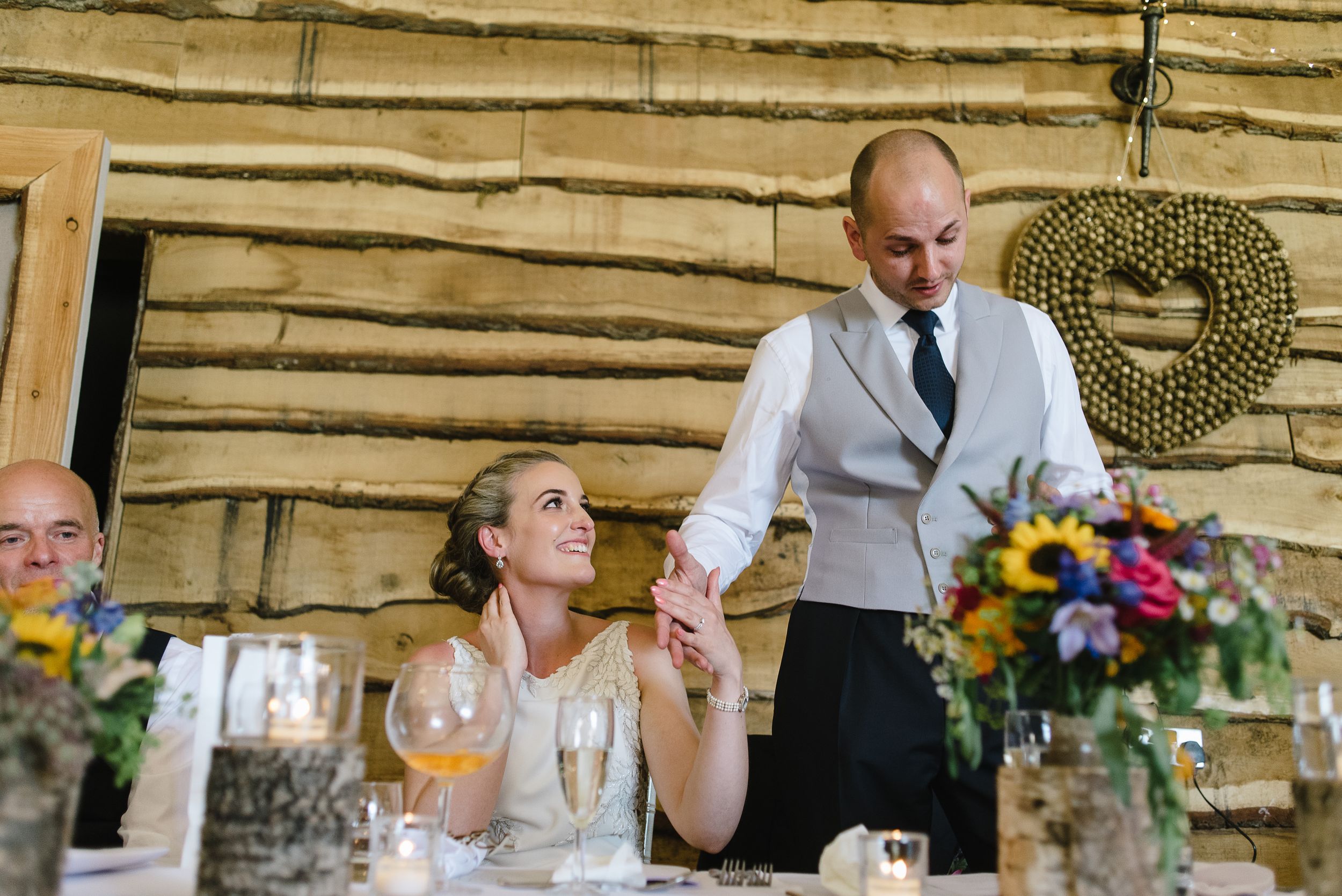 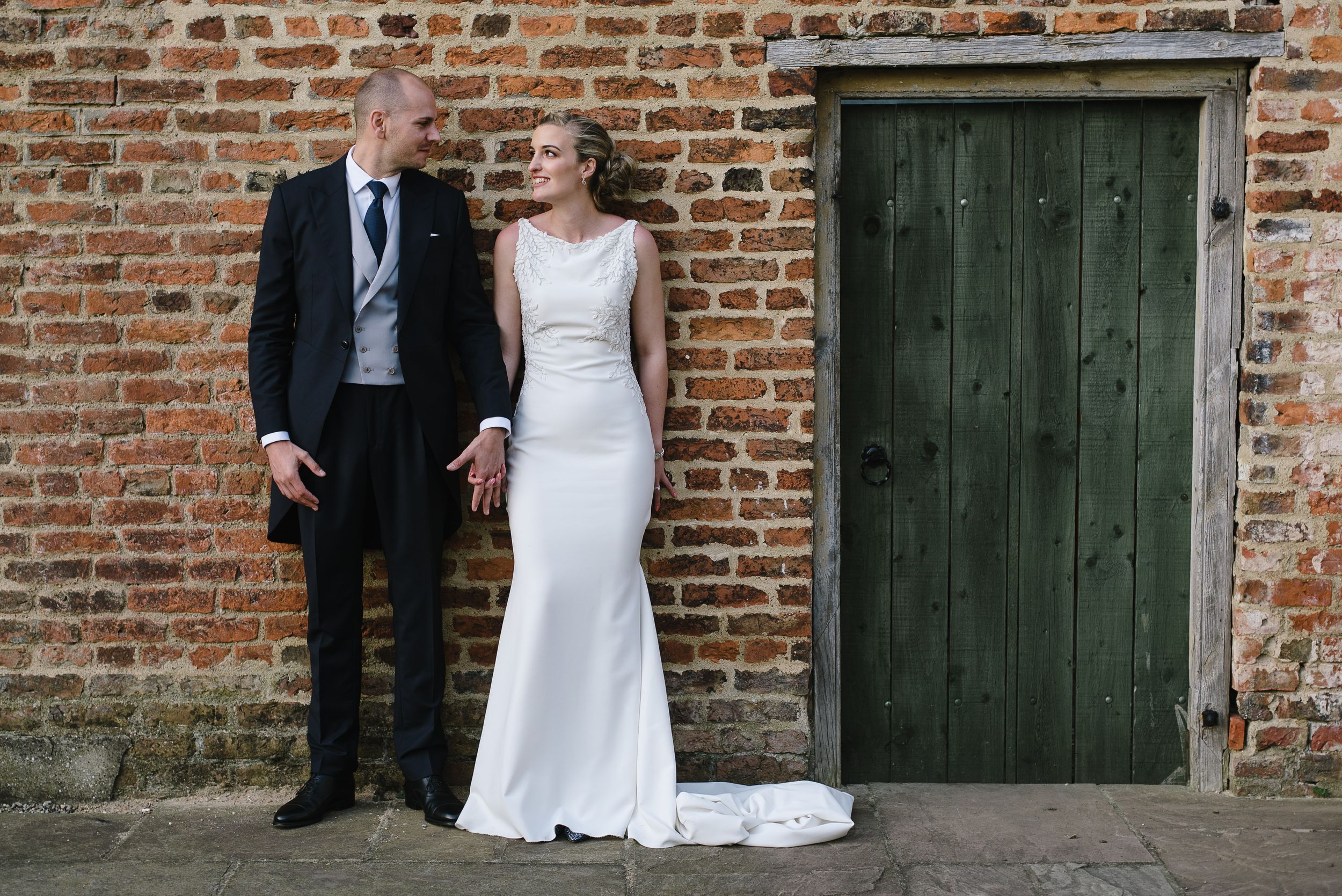 Once the speeches were finished, the brilliant Hog and Apple served the wedding breakfast, which was out of this world! Carefully curated by Will, the menu consisted of Pan-Fried Scallops, Beetroot and Goats Cheese Cannelloni, Longhorn Chateaubriand with fondant potatoes, and finished off with a spectacular desert, created especially for Will and Kirsty- Frozen Apple Parfait with Apple Sorbet, Apple and Fennel Meringue, dusted with an Apple Caramel Sherbet. Oh my! 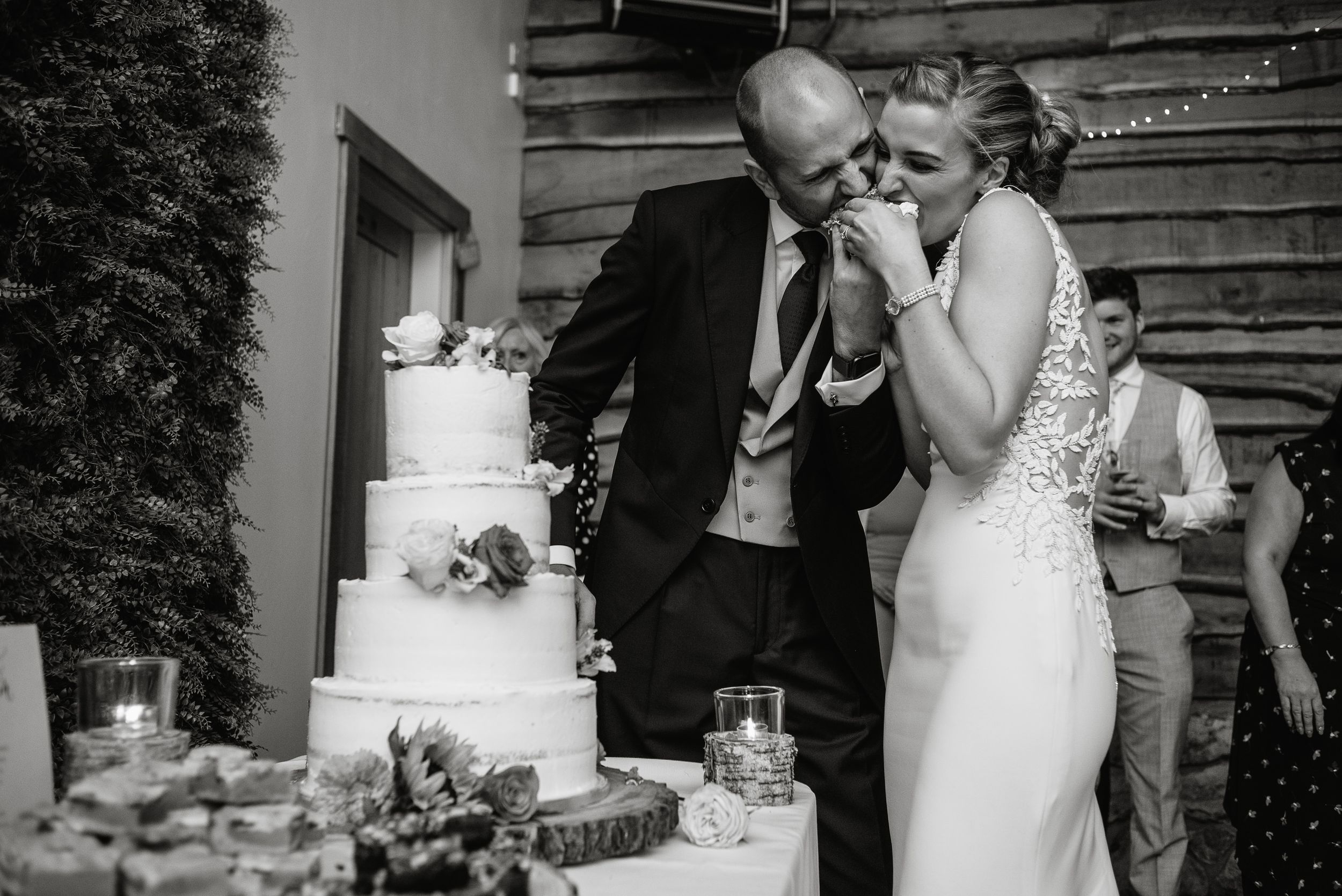 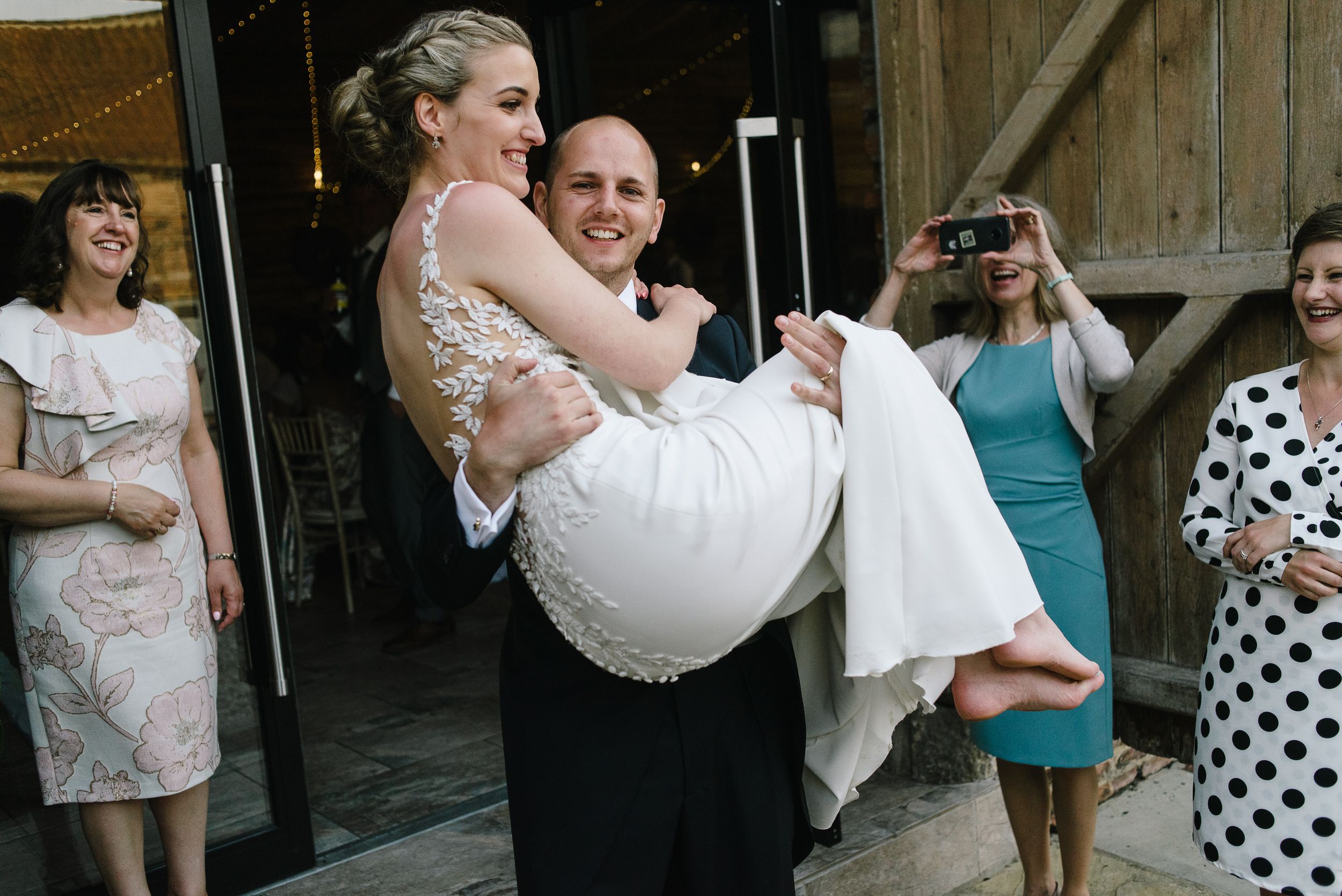 As night fell, our Bride and Groom shared their first dance to Marvin Gaye’s ‘Let’s Get It On’ before Will had a quick wardrobe change in to the loudest suit ever known, which had been a big part of the Stag Do, we are told! It was such an amazing evening, everyone had a brilliant time celebrating their loved one’s big day and we are so happy to have been a part of it. Congratulations Kirsty and Will! 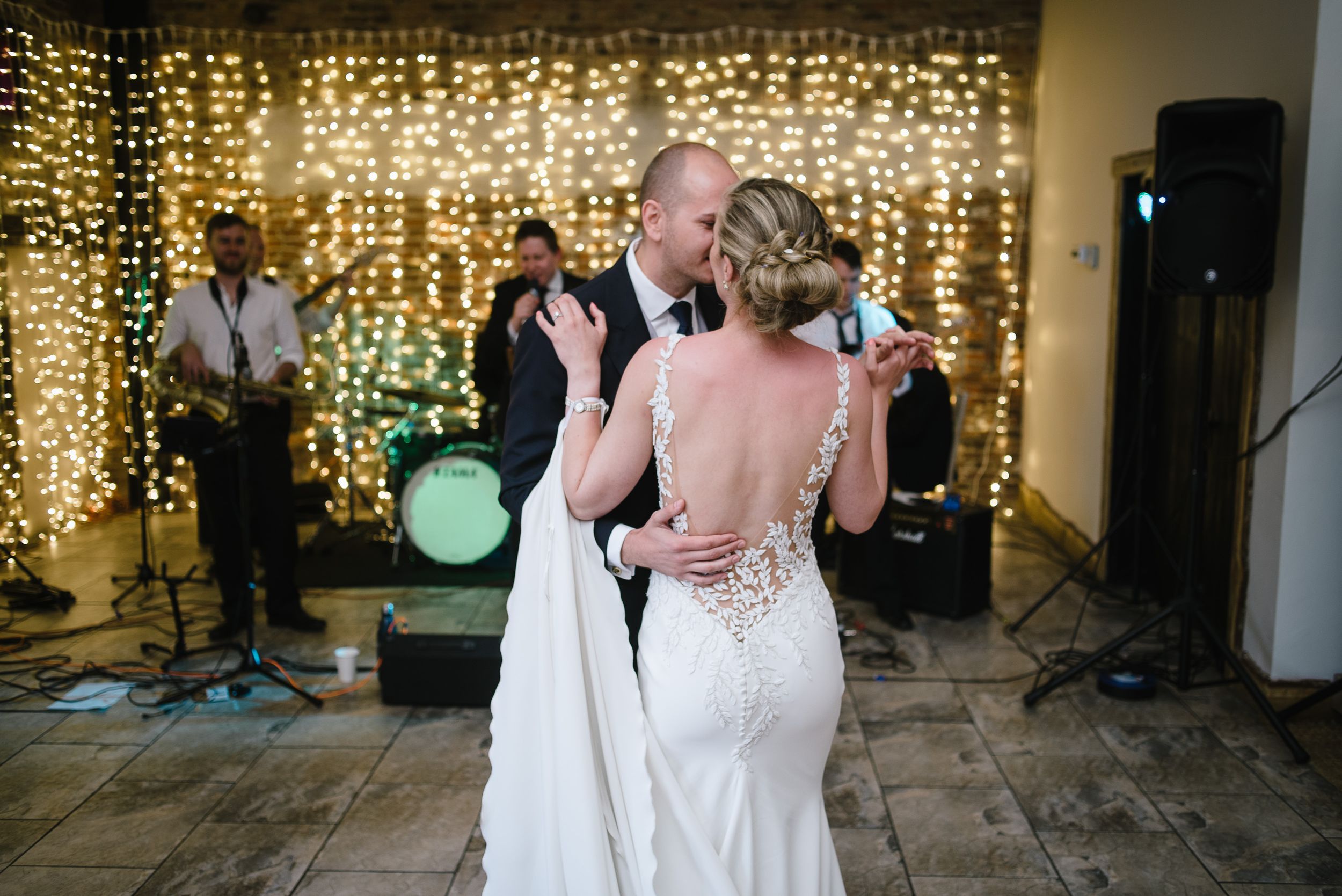 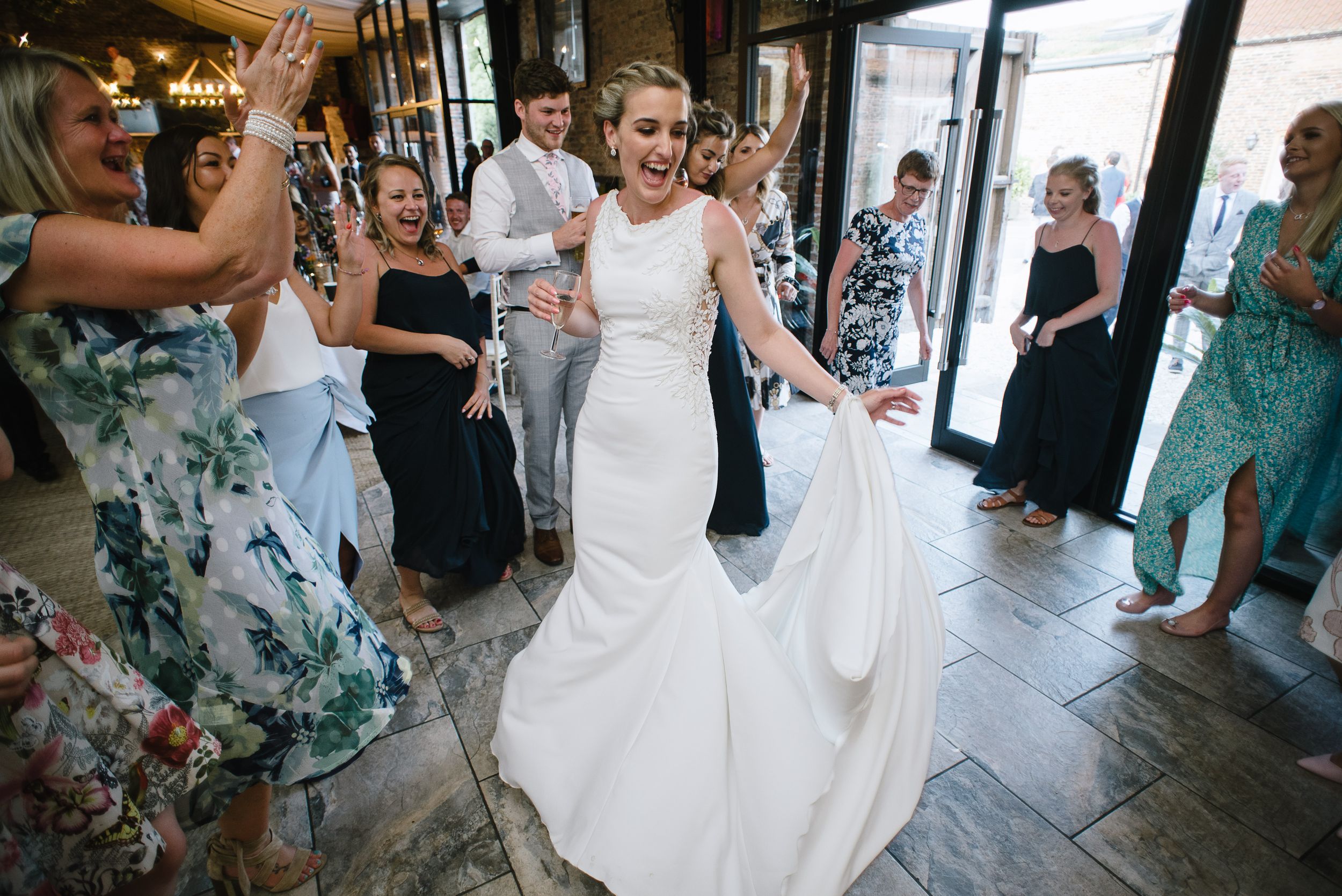 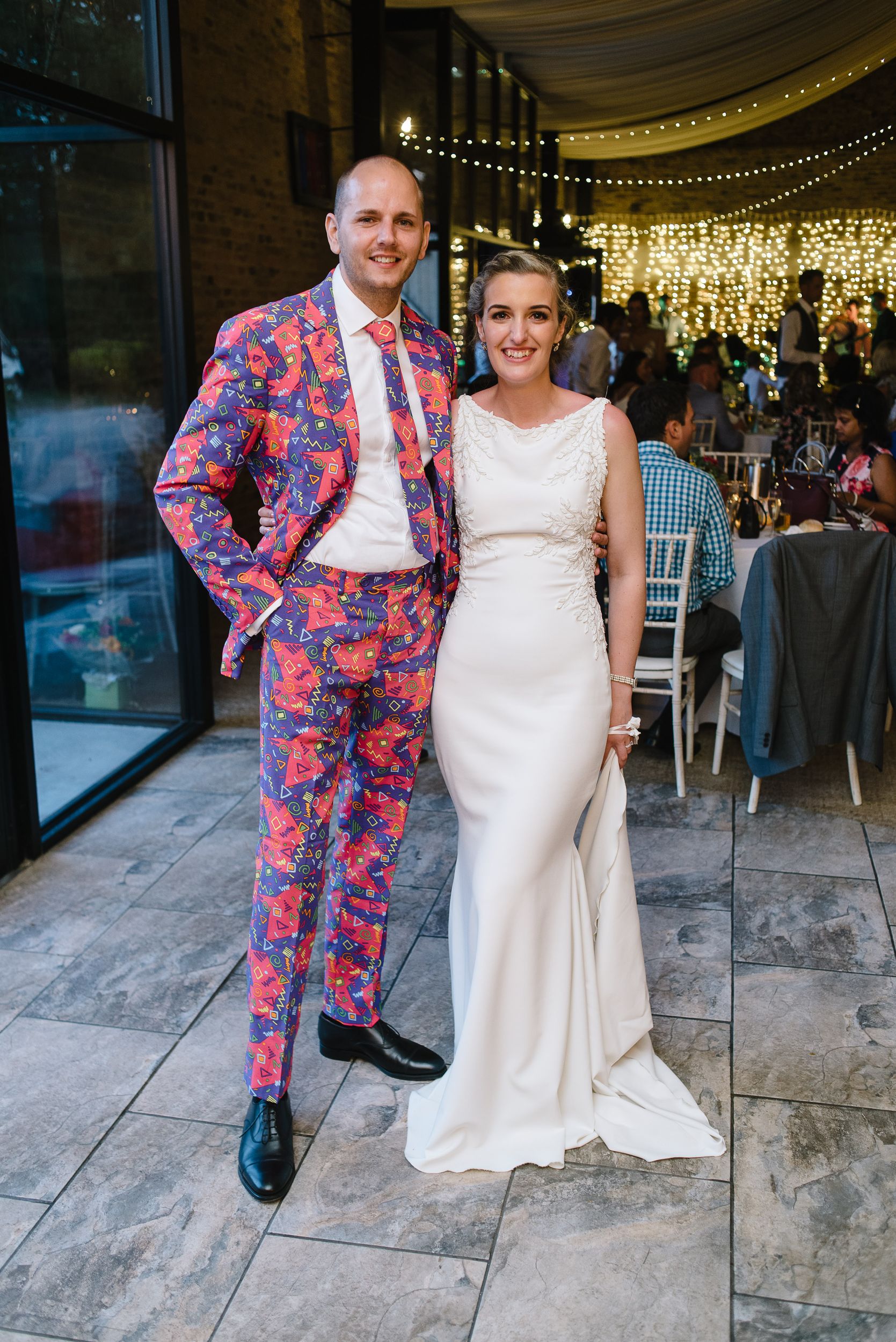 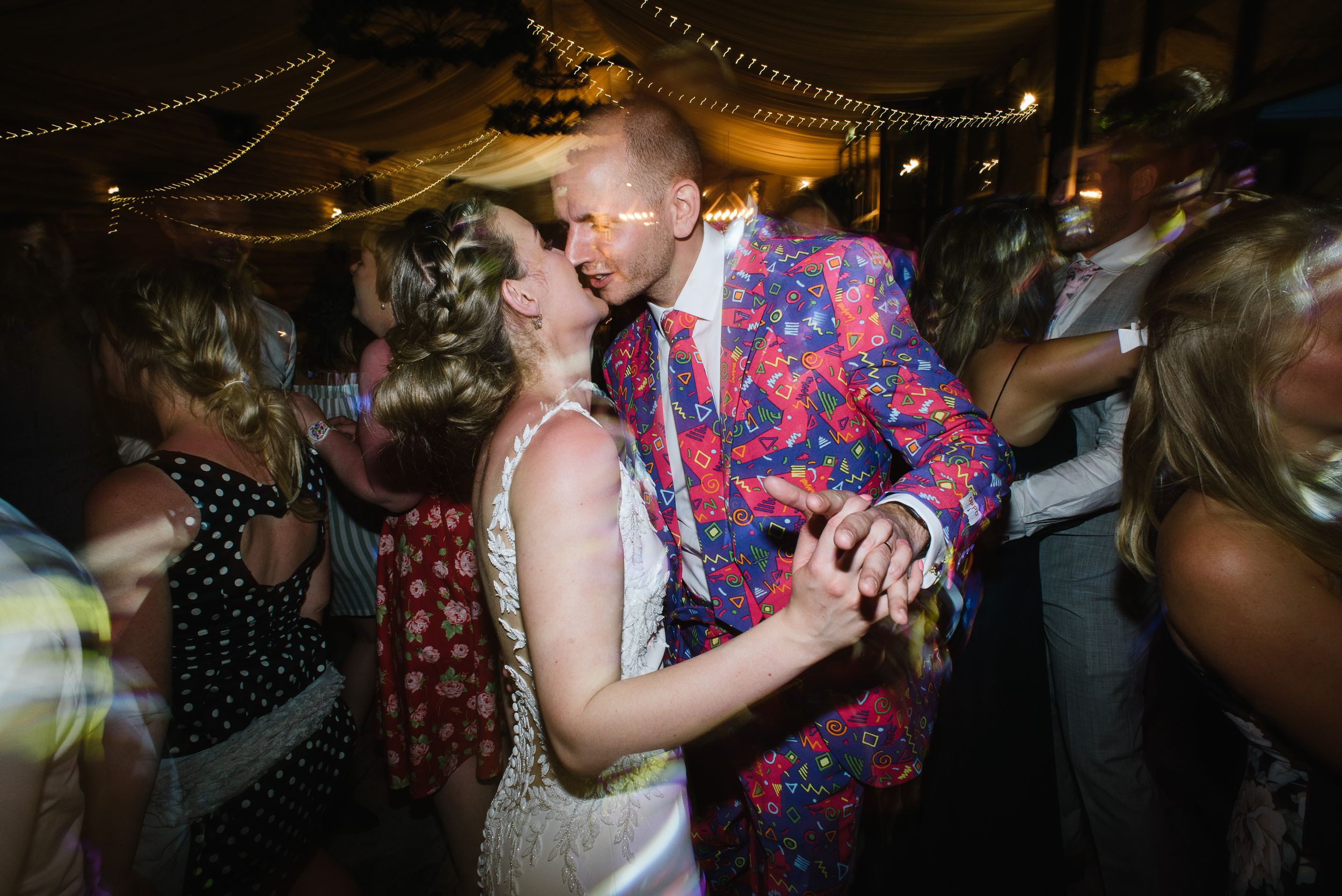